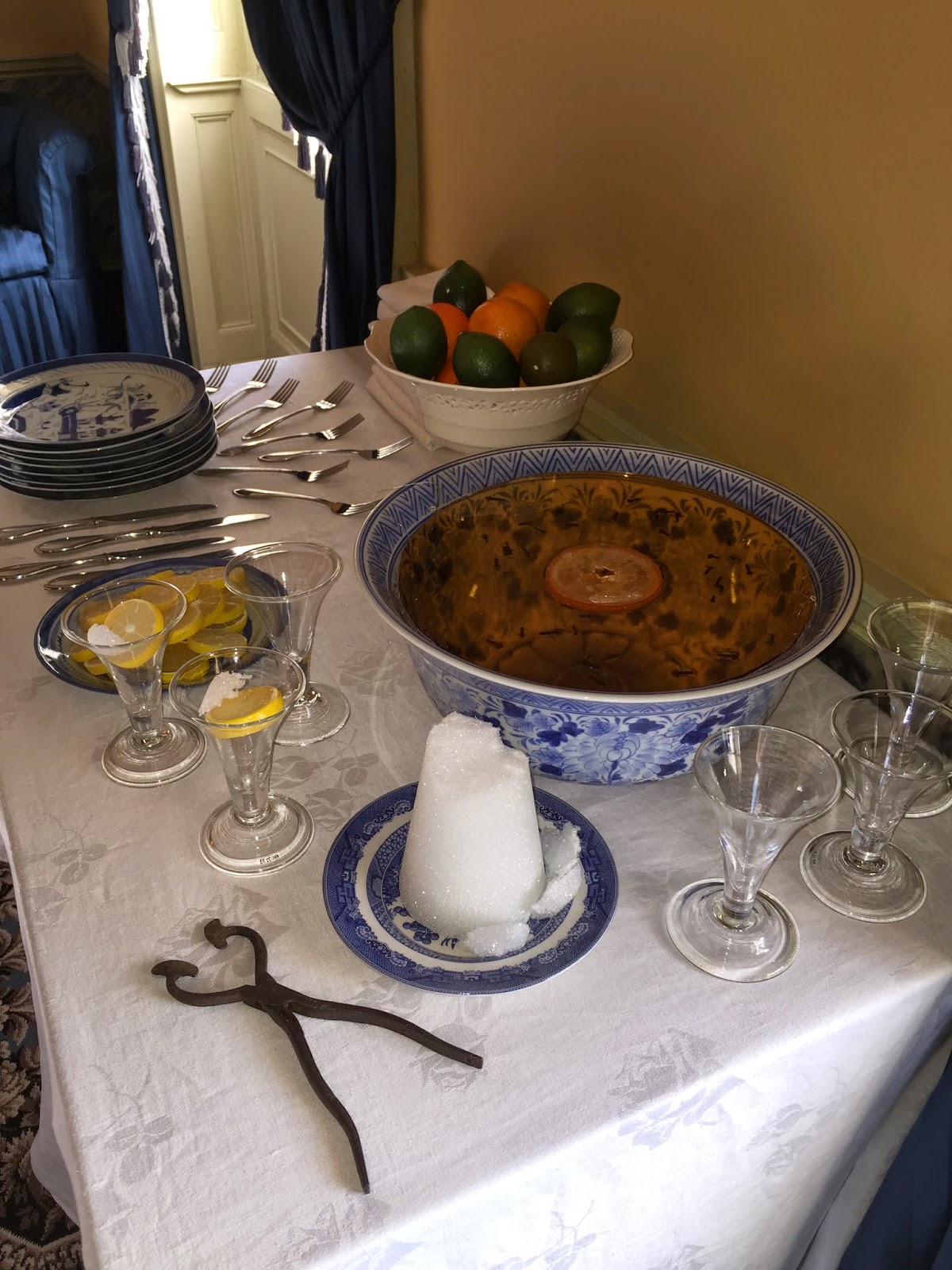 A recreated punch table for a Christmas Ball
c. 1801 Riversdale House Museum
The holidays are a time for imbibing in lots of great food and drink. In fact, a large punch bowl always at the ready was a sign of hospitality in colonial Virginia.  Based on the number of recipes for special occasion punches found in some early 20th century Maryland cookbooks, the penchant for holiday punches was clearly popular in more northern regions, as well.

According to the Merriam Webster Dictionary, the word Punch most likely comes from the Hindustani, Sanskrit or Greek words for five in regards to the five main ingredients of punch: rum (or any spirit), water, sugar, citrus and spices.  Also, the use of this word may go as far back in time as 1632.  Interestingly, when the citrus and spices, the two most expensive ingredients, are not included in the drink, it is then called a Toddy.

Mulled Cider and WineThough never really popular in America, the English tradition of "wassailing" the apple orchards on Twelfth Night is most likely the origins of the holiday bowl of mulled cider or wine. "Waes Hael" means Good Health and also refers to the drink of mulled spiced cider and/or ale that was used to sing and toast apple trees, with the intent of promoting a good harvest in the new year.

Combine ingredients and bring to a slow boil.  Simmer 10 minutes. Strain and serve hot. 4 cups apple brandy may be added after boiling, if desired.

Grate half a nutmeg in a pint of wine & sweeten to your taste with loaf sugar, set it over the fire & when it boils take it off to cool, beat the yolks of 4 eggs exceeding well, add to them a little cold wine, then mix them carefully with your hot wine, a little at a time, then pour it backwards & forwards several times ‘till it is quite hot, and pretty thick – serve it in chocolate cups, with thin pieces of toasted bread.

Mash and bruise the cinnamon, nutmeg and cloves together in an enamel or glass pan, add the boiling water and let them stand for one hour.  Strain and add the sugar to the liquid. Heat the wine in the upper part of a double boiler and add the spiced water to it.  Serve hot in mugs.  Six cups.
Claret CupHoward, Mrs. B.C. Fifty Years in a Maryland Kitchen. New York: M. Barrows and Company, Inc., 1944.
1 Quart Claret1 1/2 Quarts Sparkling Water1/4 Cup CognacIce and Sugar
Mix the ingredients and sweeten to taste.  Add the cracked ice and serve in tall glasses.  Serves ten to fifteen.
If a hot cup is liked for a cold winter's night, add three pints of hot water instead of the ice and sparkling water called for.  Add one cinnamon stick to each mug and a slice or two of lemon.
Farmer's Bishop, A Christmas Punch
Maryland's Way: The Hammond-Harwood House Cook Book.  Annapolis: Hammond-Harwood House, 1963

Cut oranges in half and stick skins full of whole cloves. Bake in oven until juice begins to run. Remove to bowl that can be kept hot. Add sugar to taste and pour over them 1 quart apple brandy. Light brandy and after it has burned a few seconds, extinguish by pouring over the cider. Place bowl over a low flame or at back of stove. Add pinch of cinnamon, whole allspice and nutmeg (go easy on spices). Stir mixture until hot. It should be kept hot while being served but must never reach boiling. Serves about 24. This punch was served in the countryside when the Bishop was expected. The receipt said, 'Add brandy to the amount of the capacity of the Bishop.'


Egg NogThis treat which is quite traditional in America probably started out as a posset, a sack posset, or an egg caudle. A posset is a slightly curdled drink made of hot milk mixed with sugar, spices, citrus and beer, sherry, or wine. A sack posset is made with sweet white wine, like sherry. Possets became popular in the Middle Ages, and by the 17th century, eggs started to be added to possets. These were sometimes called egg-caudles.

The first written reference to egg-nog was from its mention on a breakfast menu at City Tavern in Philadelphia, February, 1796. It was considered a hot winter treat and may be why it is so much associated with Christmas today.

There are, no doubt, a hundred and one receipts for Egg-Nog; most suffer from being too sweet or too rich.  Egg-Nog has been served on New Year's Day in my family for at least four generations, and it has always been made in the same way, in the same bowl.  It has been made to drink, not to taste ritually.  The passing years seem to have confirmed the judgment of older generations.

Stir these together in the bowl and float on top the whites of the eggs, beaten until stiff, sprinkle freshly grated nutmeg over the whole. Do not heat or chill it, do not compromise with the quality of liquors used, and do not use cream.

"Port, a popular wine in the 18th century, is mulled in the same manner as was customary in the old seaport of Annapolis."

Dissolve sugar in 1 cup of boiling water.  Combine this with the lemon juice and Port in a lined pot over an open fire. Add cinnamon stick and the rinds. Serve hot with a dusting of nutmeg. 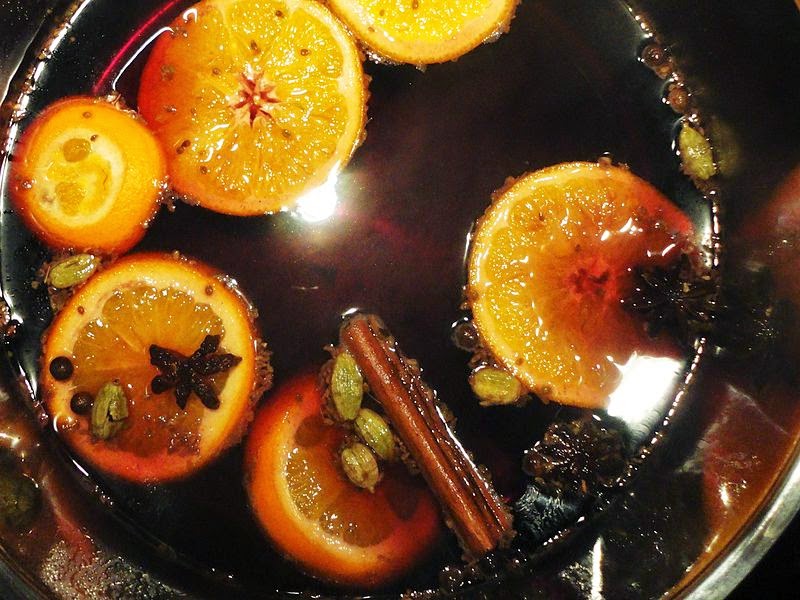